After publishing my debut novel Seelie Princess back in September, I went on to write the sequel during NaNoWriMo 2019. Though I hit the 50k at the end of November, I didn’t finish the first draft until mid-January of this year. I took a short break from my book before starting the editing process. I’ve still got a long way to go, but in the meantime I’d like to share the opening scene for Book 2 in The Crown of Tír na nÓg series titled Unseelie Queen. (I sent this out to my lovely mailing list subscribers about a month ago; if you’d like to join that list too, click here.)

Kayla hadn’t known she was prone to seasickness.
As the waves crashed against their tiny boat, carrying it any which way, Kayla clutched a hand to her stomach. The other tried to reach for Fay, who grabbed the railing of their boat.
“Don’t let go!” Fay cried over the roar of the waves.
Opposite of them, Nooa’s face turned the sickly color of a green Faery Light. Even Maeve looked pale. No one spoke as another gust of wind howled across the sea, tossing the boat left and right. The waves grew higher and higher before crashing onto the boat.
Before Kayla could as much as scream, she was doused in salt water. The force of the wave shoved Kayla back, away from Fay. Flinging her arms, Kayla tried to get a hold on someone—or something—when another wave knocked into her.
Kayla lost all sense of which way was up as she tumbled through the water. Salt water burned her eyes as she forced to keep them open, trying to make out any shapes and shadows. She glimpsed something in the distance and started swimming toward it. The waves thrust her back and forth as she kicked with her legs. Her chest ached with the need for air.
Something closed around Kayla’s ankle, and she screamed, sending up bubbles. Whatever had hold of her foot swam with impressive speed, and soon they broke through the surface.
Kayla hit the packed ground, spluttering and gasping. As she rubbed saltwater from her eyes, her surroundings shifted into focus. She sat on a rocky shore, facing the wild sea that raged underneath the dark sky. No sight of their boat or any survivors. Until Kayla lowered her gaze.
She yelped, crawling backward. “Who are you?!” 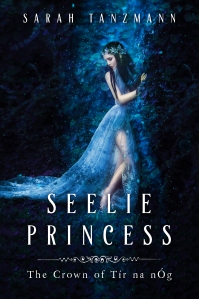